We’ve recently reviewed The Wind Rises soundtrack which features Joe Hisaishi‘s compositions for Hayao Miyazaki’s final anime film about Japan’s aircraft pioneer, Jiro Horikoshi. As we’ve noted in the review, much of Hisaishi’s music is firmly focused on Jiro’s journey, starting from his time as a little boy with a love for airplanes, to his life as an engineer, designing aircraft like the Mitsubishi A6M Zero which would be used in World War II.

One thing that stands out is just how beautiful Hisaishi’s music is. There are times where he’ll create the lightness that comes with flying airplanes. In other times, he’ll weave musical flourishes that capture the grandiosity of Jiro’s vision. Finally, the tragic relationship between Jiro and his wife Naoko materializes through many of the melancholy pieces on the Wind Rises Soundtrack. So give our review a read and let us know whether you think this is an excellent way to see out the collaboration between Joe Hisaishi and Hayao Miyazaki. 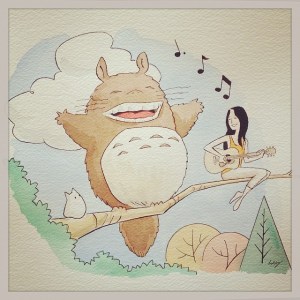 Studio Ghibli announced that they would be working on a new movie titled When Marnie Was There, an adaptation of a novel by Joan Robinson which features 2 female leads, Anna and Marnie. When this announcement came, people wondered who would be chosen to perform the theme song and that honor goes to American artist Priscilla Ahn, who will perform “Fine on the Outside,” a song she wrote when she was in high school.

The choice of Priscilla Ahn’s music is a bit of a surprise since the song will be entirely in English. However odd this may be, it isn’t without precedent. When Studio Ghibli released Whisper of the Heart, they used Olivia Newton-John’s “Take Me Home, Country Roads,” albeit with both English and Japanese lyrics. Many of the pieces used in The Secret World of Arrietty also featured English-language lyrics written by Cecile Corbel.

Given the grand tradition of Ghibli theme songs, however, we are very much looking forward to what Priscilla Ahn delivers upon and how well it’ll mesh with the movie itself.