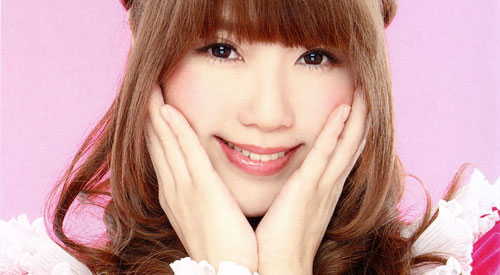 There’s something to be said for gratitude, especially when you take on the voice of one of the most popular characters for a franchise that’s propelled your career. That’s what happened to Pile, the Korean-Japanese singer who takes on the role of Maki Nishikino from the school idol anime Love Live. This role has allowed her career to grow and grow to where she’s offered more roles and opportunities to perform.

To thank the Love Live franchise, particularly Maki, for all that it’s done to help her out, she snuck in a hidden message in the lyrics to the song “P.S. Arigatō…”. Scattered in the song are words that combine to read:

Maki-chan, I can finally say it. I really thank you [for everything] up till now. I’m here because of you. Watch over me gently somehow. P.S. Really, thank you.

While Pile might be thankful for Love Live in enabling her career growth, the Love Live franchise should also be grateful to her. The Love Live franchise’s last single, titled “Moment Ring”, has sold 16,799 copies from March 7-13. It sold even better during its first week, with 96,479 copies, making it the top-selling Love Live single CD of all time! In addition to the A-side, the single also contains the B-side “Sayonara e Sayonara”, which, if nothing else, is an appropriate way to conclude a cute, but wonderful franchise.