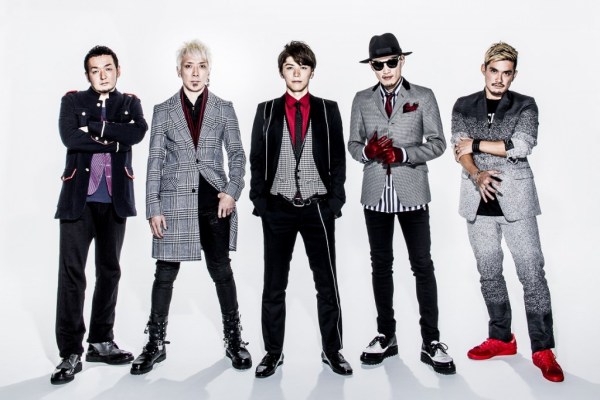 Aside from JAM Project, FLOW is probably the only other male J-pop band that’s done so many songs for so many different anime. And for fans looking to catch them in a live concert, you’ll be able to find them hanging around Somerset, New Jersey between June 12 through the 14 at the AnimeNEXT convention held at the Garden State Exhibit Center.

FLOW, the group made up of members including vocalist Keigo Hayashi, guitarist and vocalist Koushi Asakawa, guitarist Takeshi Asakawa, drummer Hiroshi Iwasaki, and bassist Yasutarou Gotou have all been around since 2000 and they’ve done some pretty notable anime works over the years, starting with “Go!!”, the 4th opening theme for Naruto, but really struck it big with “Days” from Eureka Seven and the famous “Colors”, the opening theme for Code Geass which has their signature “Jibun wo” lyric.

Their current activities right now consist of the single “Ai Ai Ai ni Utarete Bye Bye Bye”, which was used in Samurai Flamenco, and “7 -seven-“, which saw them collaborate with Granrodeo to perform the ending theme to the The Seven Deadly Sins anime. Other than that, they’ve been touring around anime conventions around the world to promote their music and meet their fans which, judging from the songs of theirs that came up during the Animusic Tourney, shows that they have quite the large fanbase.

More information about the concert and other going-ons at AnimeNEXT can be found on the website. Those who have looked back upon anime like Eureka Seven, Code Geass, and Naruto should derive much enjoyment from their performance.

Rock Band FLOW to Perform at Anime Fest in Dallas 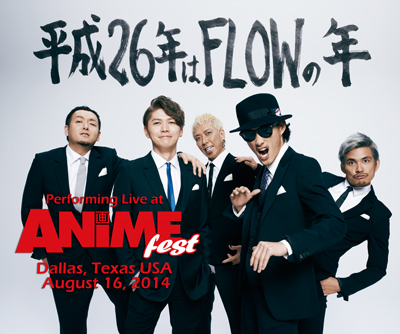 FLOW, a 5-man J-rock band have been around since 1998. This group, made up of the two brothers KEIGO and KOHSHI on vocals, guitarist TAKE, bassist GOT’S, and the drummer IWASAKI, has done many works for anime such as the opening themes to shows like Naruto, Eureka Seven: Psalm of Planets, Code Geass, and Samurai Flamenco. If these are anime songs that have really rocked your world, you will want to check out the performance that FLOW will be putting on at Anime Fest, an anime convention in Dallas, TX. So if any of you are going to be in Dallas between August 15th – 18th in 2014, that’s a concert you can look forward to.

For those of you who might not recognize their name up front or might not be familiar with their works, here is a sampling of what they’ve done previously. They’re probably got their way into the anime fan’s consciousness back when they released the song “Go!!!” which was used as the opening theme to the Naruto anime. Take a look:

From there, they went to do a couple songs for the Eureka Seven franchise. “Days” was one of those songs that got really popular when the anime was airing and FLOW went on to do another opening theme titled “Bravelue” for Eureka Seven AO. Here’s their work “Days”:

But out of all the songs they’ve written for anime, perhaps none of them is more iconic than Code Geass’s “Colors”. There’s something about that iconic JIBUNN WOOO opening lyric that really resonates with people and made the whole Code Geass experience that much more memorable. Definitely a song that most people are likely to be familiar with. After all, that energy is really infectious and one that stands tall in terms of what people are likely to remember from the show:

So with all the songs they’ve done, past and present, their concert appearance at Anime Fest should prove to be an entertaining one.