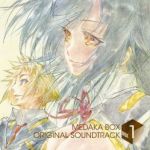 The anime music release schedule for August 8 might be pretty light on anime soundtracks, but there is one that’s worth taking note of:  Tatsuya Katou’s Medeka Box Original Soundtrack.  The Medaka Box anime is focused on Medaka Kurokami, the student council president who tries to fulfill her fellow students’ suggestions.

For those of you who might not be familiar with Tatsuya Katou’s work, he is an up-and-coming composer who has done work on anime such as Kämpfer’s Original Sound Track. While a so-so solo debut, some of his other works have gotten more plaudits like his soundtrack for Horizon in the Middle of Nowhere and Mirai Nikki‘s soundtrack is said to have been solid as well.

Preorders for the Medaka Box soundtrack can be done so through CDJapan as usual.

Also, for people interested in Idolm@ster music, we’ve published a review of Idolm@ster’s Perfect Idol 04 over on our anime music blog site.  Check it out if you want to see how well pop music can be combined with bossa nova to yield a fun listening experience!