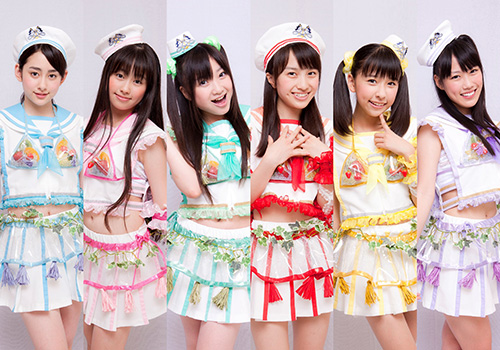 Momoiro Clover Z, the wonderful gaggle of idol pop stars that includes Kanako Momota, Shiori Tamai, Ayaka Sasaki, Momoka Ariyasu, and Reni Takagi, have announced that they will tour North America this year. The tour, dubbed the Crossing America Ultra Live, will consist of 4 performances total and will take place in New York, Los Angeles, and Hawaii. This announcement came at the tail end of their Japanese concert tour that’s quickly coming to a close.

This concert tour won’t mark Momoiro Clover Z’s first appearance in North America. Last year, they performed in concert at Anime Expo alongside Paul Stanley and Gene Simmons who represented the glam rock band KISS. The two made for an oddball performance as they sang “Yume no Ukiyo ni Saitemina”, a collaboration worth of a 2015 MTV Video Music Award.

But anime fans will want to seek them out for their theme song performances, many of which are pretty memorable. “Mugen no Ai” from Bodacious Space Pirates proved to be pretty popular and it was hard to find people who didn’t like the deliciously obnoxious blend of traditional Japanese fare mixed with high-speed shoujo rap in “Nippon Egao Hyakkei” from Joshiraku. In addition to those songs, they’ll also perform a version of the Pretty Guardian Sailor Moon Crystal: Season III opening theme.