For most anime fans, their exposure to the rock band The Pillows came about through watching FLCL. Amidst FLCL‘s spasticness, The Pillows thrilled with musical numbers such as “Ride on Shooting Star” and my personal favorite of the bunch: “Little Busters”. Although their anime contributions since then have been few and far in between with contributions to Beck and Moonlight Mile, this spring season, they’ll be contributing a song to the Ninja Slayer anime’s long list of ending themes in the form of “Locomotion, more! more”. Better still, this song will be the first ending song to be played in case you don’t want to go through the entire Ninja Slayer anime.

So although Ninja Slayer has been streamed about a year ago, the new Ninja Slayer TV airing will compile those TV episodes with the broadcast to begin airing on April 2 on Tokyo MX1.

And if you’re like me and you’re not all that keen on watching Ninja Slayer, you can still catch sight of the song on The Pillows’ 20th album, titled Stroll and Roll. This album will be released on April 6, marking 27 years of being around, rocking out, and winning Western fans with their contributions to that Gainax anime of old, FLCL. 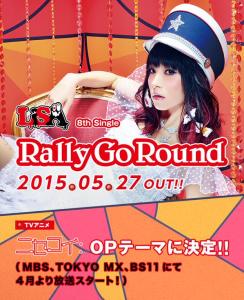 Season 2 of the Nisekoi anime will be airing in less than a month, but not every detail has been released just yet. In their latest announcement, anime music singer LiSA will be performing the opening theme to Nisekoi, titled “RallyGoRound” with LiSA announcing the news on her Twitter account.

For many fans, this announcement will be very well-received. LiSA has had a long history of performing music for anime, most notably as the singer for Yui, a character from Angel Beats, who was a part of a school band named Girls Dead Monster. Her power pop style and flashy flair have won many people over, especially in her delivery on “Oath Sign”, Fate/Zero‘s opening theme, and “Crossing Field”, the opening theme to Sword Art Online. In addition to all those singles, she has also shown up at conventions like Anime Expo where LiSA performed live in concert.

Her musical delivery tends along the brash and bold side, making her a great spectacle on stage, but she isn’t quite as solid on nuance. Nevertheless, her fanbase remains huge and should be pleased to hear her perform her 8th single. Those looking forward to getting LiSA’s latest single will have to wait until May 27 for a CD release of “RallyGoRound”. Until then, they can catch Nisekoi season 2 when it airs on April 10.

A Harmonica Rendition of Ano Hana’s Secret Base

One of the most heartfelt songs in anime comes in the form of Ano Hana’s ending theme “Secret Base”, a song originally performed by the all-girl band ZONE, but has been repurposed many times, including for anime. The song is particularly poignant in the way it meshes with Ano Hana’s storyline pound for pound and it’s hard not to get a chill in the back of your spine after hearing its sentiments and really understanding the lyrics and becomes an unforgettable experience for most.

As always, it’s fun seeing the song used in other contexts and Youtuber Jang Li graces us with a harmonica version of the piece. Through his expressiveness, “Secret Base” retains its heartfelt message, standing well on its own to dispense with its sentiments to yield something absolutely beautiful. Give a listen to it below:

After the end of the first of the Anime Music Tournament Championship Rounds, one of the pieces that have managed to demonstrate its staying power has been none other than Cowboy Bebop’s “Tank!”

With its cool jazzy tones along with a wickedly awesome sax solo that manages to mesmerize, the song basically hearkens back to what may be some of the best anime of all time, taking the bounty hunters in space concept and implementing it in a way that makes the characters seem really down to earth and human. The music also goes a long way towards giving the chaotic feeling that comes with their adventures, but they mix in quite a few poignant pieces in the soundtrack to keep the emotions flowing heartily.

Give the song a listen and let us know why you think it’s one of the best anime songs or if it’s simply overrated:

Some of you may be aware, but we’ve been quietly putting together a Best Anime Music Tournament. As you can read from our latest entry, the tournament will focus entirely on anime opening and ending themes where people will nominate their favorite anime songs, be it from an opening, ending theme, or even an insert song. Once the song votes are tallied seeded, people will then vote on the tracks they like best in the format of a head to head competition. It’s pretty simple when it comes down to it!

For the time being, what we’re looking to do is figure out whether the guidelines we have in place are good enough. As you can imagine, there are a lot of ways in which to do this, and what we currently have is just one way of going about it. If you have other thoughts or ideas, we’d love to hear from you to see how to best improve things.

So head over to the site and make a comment! Once we’ve compiled all of the feedback, we’ll create the guidelines and open up the nominations thread so that people can come in to put in the songs they feel are worthy of being represented in this tournament.

If there’s anything that sets racing anime Initial D apart from other anime, it’s that the anime uses a lot of Eurobeat to set the stage for the races.  One of the groups who have been a part of this project has been the 2-person band M.O.V.E, which includes singer yuri (real name Yuri Masuda) and rapper motsu (real name Mototaka Segawa).  And based on reports out of Kodansha Magazine via MangaNewsJapon, M.O.V.E will be writing and performing a new theme song for the Initial D anime set to be released this year.

This won’t be the first time M.O.V.E has worked on the Initial D franchise.  One of their greatest hits (see below), “Around the world,” was used as Initial D’s opening theme.  Some of their other works for anime include “Romancing Train” from Final Fantasy Unlimited and “i WAKE YOUR LOVE!,” which was used in Asobotto Senki Goku.  Currently, no single announcements have been made.  As for this latest addition to the Initial D franchise, expect it to air this coming November. 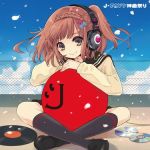 42 songs are a lot for an anime song compilation to have, but Sony Music (with help from DJ Kazu, who has worked on events such as Animax Musix 2011) was able to compile those songs onto 1 disc and release it on February 8 of 2012.

The album, as one might expect, covers a lot of artists (Nana Mizuki, Minori Chihara, and Yukari Tamura are but a few of the artists featured) and many prominent anime series (included are themes to Lucky Star, The Melancholy of Haruhi Suzumiya, Toradora and even Hyadain no Kakakata☆Kataomoi-C from Nichijou and “Magia” from the recent Puella Magi Madoka Magica anime).

Those who are interested can order the album over at CDJapan. If you just want to find out more about this collection, you can check it at the source at the main J-Anison Shinkyoku Matsuri website. 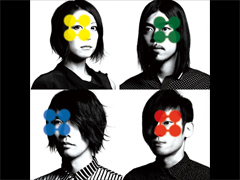