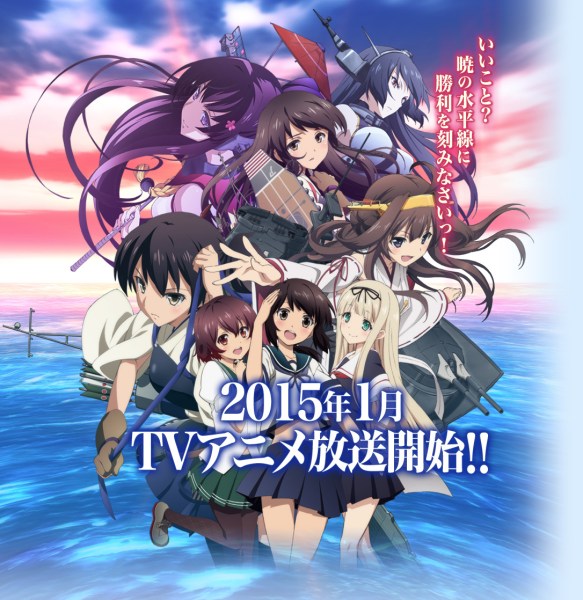 For a series that should have been at least as good as Strike Witches, Kantai Collection, also known as KanColle, has severely underperformed in pretty much all but one aspect: the music. We’ve finally been able to review all of the aspects of KanColle‘s music and have been won over not only by the ending theme, but also completely floored by just how good the anime’s soundtrack is.

Granted, not everything was sunshine and rainbows. When we looked at KanColle‘s opening theme, Miiro, and saw that it was sung by the formidable AKINO of bless4, we braced ourselves for powerful power-pop that would have us enthralled by AKINO’s enthralling singing on top of a catchy melody. Unfortunately, that did not come to pass and it remains the weakest component of KanColle‘s music.

But when you looked at KanColle‘s ending theme, Fubuki, the song created a bit of confusion since Shiena Nishizawa’s energetic performance made it more suitable for an opening theme. Which is to say it was energetic, catchy, and emphatic! Definitely a solid debut for Nishizawa and we hope to see more of her performances since her delivery, while nothing jaw-dropping, is pretty competent.

But the anime’s crown jewel by far is none other than KanColle‘s soundtrack itself. Composed by Natsumi Kameoka, KanColle‘s soundtrack is thrilling, mixing in some of the most glorious orchestral pieces I’ve heard lately. It does everything right, from the wonderful character-centric themes, to pleasant depictions of the setting and of day to day life, to even battle music that packs quite a punch. It’s not necessarily the kind of fare you’d expect out of a show meant to please fans of a popular web game, but in hiring Natsumi Kameoka and having her compose the score, they really hit it out of the park. KanColle‘s soundtrack is a real treasure, one that commands your attention if you enjoy orchestral anime music at all.