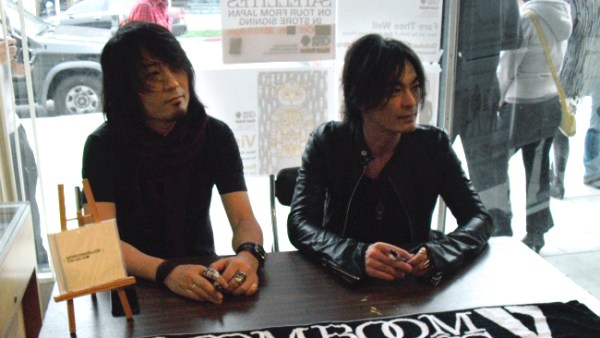 The Boom Boom Satellites burst on the anime music scene with “Shut Up and Explode”, a song that packed the kind of energy that would help the song stay true to its title. The song, used as the opening theme to Xam’d: Lost Memories, basically put them on the map, and they’d go on to do other anime works including “Broken Mirror”, used in Gundam Unicorn.

So there’s a measure of regret when they announced that their song, “Lay Your Hands On Me”, used as the opening to the anime Kiznaiver, would prove to be their last. The reason for that is that vocalist/guitarist Michiyuki Kawashima experienced a brain tumor relapse. As a result, he’s suffering from partial paralysis and can no longer perform. This development had forced Boom Boom Satellites to cancel their concerts in Osaka and Tokyo last November.

Still, they’ve had a rich, 20-year career, as they’ve entertained fans in both Japan and the US where they made appearances at major US conventions like the NY Anime Festival back in 2010. Their compositional credits in the anime realm includes “Back In Black”, which serves as the main theme for the upcoming anime adaptation of Ninja Slayer.

So even though their performances will fade into the waves of time, there’s never a better moment to relive their best-known work, even now, “Shut Up and Explode” where the refrains of “Run Away” will forever burn into my memories: