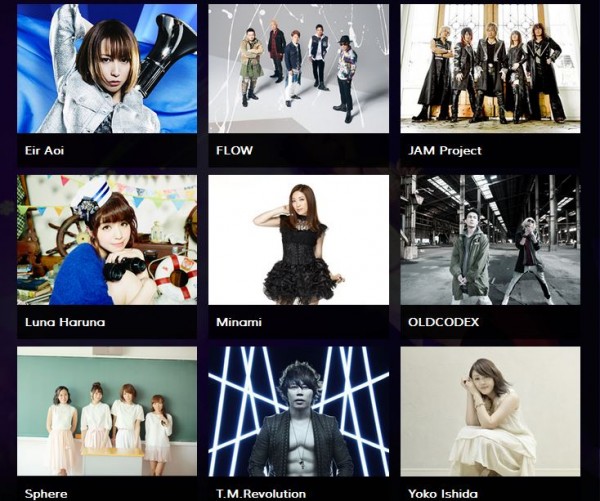 A couple weeks ago, we announced that the J-pop artist MICHI would be at Anime Expo. Based on the YouTube videos featuring her vocals, I concluded that she was competent, but not the kind of singer that would draw crowds to Anime Expo.

All of that changed when Anime Expo announced that they’d be hosting the Anisong World Matsuri in conjunction with the convention. And boy did they get some big names to commit into showing up.

The collection of singers feels a lot like a who’s who of Anison. You’ve got acts like JAM Project who’ve seemingly been around forever. New fans know them for their One Punch Man opening theme, but these guys go all the way back to 2000 when they debuted with “Kaze ni Nare” for Éx-Driver. Their better-known body of work includes Scrapped Princess’s, Gravion, and Mazinkaiser opening themes.

But that’s not all. There’s Sphere, whose singers might as well be the K-ON girls (with the addition of Haruka Tomatsu and Ayahi Takagaki thrown in for good measure), FLOW, whose work on Code Geass is pretty damned legendary, and T.M. Revolution whose work really needs no introduction since he’s collaborated with Nana Mizuki on Valvrave’s opening theme but whose work on stuff like Gundam SEED’s “Invoke” is far better known (and far better sounding). There’s more artists that you can peek at above, but that’s a pretty formidable lineup to say the least.

Unlike many of the other conventions, this one’s practically in my backyard. If you check on Daisuki’s website, tickets are still not yet available for purchase. But for an event of this caliber, I’ll definitely be keeping my eye out. So watch this space for updates and hope you’ll look forward to my concert reports like the ones I do pretty much every year!